Semantics and Pragmatics: Drawing a Line

This book explores new territory at the interface between semantics and pragmatics, reassessing a number of linguistic phenomena in the light of recent advances in pragmatic theory. It presents stimulating insights by experts in linguistics and philosophy, including Kent Bach, Philippe de Brabanter, Max Kölbel and François Recanati. The authors begin by reassessing the definition of four theoretical concepts: saturation, free pragmatic enrichment, completion and expansion. They go on to confront (sub)disciplines that have addressed similar issues but that have not necessarily been in close contact, and then turn to questions related to reported speech, modality, indirect requests and prosody.

Chapters investigate lexical pragmatics and (cognitive) lexical semantics and other interactions involving experimental pragmatics, construction grammar, clinical linguistics, and the distinction between mental and linguistic content. The authors bridge the gap between different disciplines, subdisciplines and methodologies, supporting cross-fertilization of ideas and indicating the empirical studies that are needed to test current theoretical concepts and push the theory further.

Readers will find overviews of the ways in which concepts are defined, empirical data with which they are illustrated and explorations of the theoretical frameworks in which concepts are couched.  This exciting exchange of ideas has its origins in the editors’ workshop series on the theme ‘The semantics/pragmatics interface: linguistic, logical and philosophical perspectives’, held at the University of Lille 3 in 2012-13. Scholars of linguistics, logic and philosophy and those interested in the research benefits of crossing disciplines will find this work both accessible and thought-provoking, especially those with an interest in pragmatic theory or semantics.

"In conclusion, this volume is a must-read book for any scholar who shows akeen interest in the issue of the boundary between semantics and pragmatics. Andthe format of the book is greatly impressive: in the majority of cases, responsepapers follow target papers, which reads like dialogues between scholars. Readersmay be highly impressed by scholars' earnest arguments as well as friendly andilluminating debates. Besides, this book is abundant in theoretical implications,particularly in new thriving areas such as clinical pragmatics and experimentalpragmatics."
Reviewed by Long Zhang et Shaojie Zhang in Journal of Linguistics 55 (2019).

"It seems obvious, however, that semantics and pragmatics are too serious to leave them in the hands of logicians and linguists alone; or to philosophers alone, for that matter. Cappelen (forthcoming) claims that philosophers shouldn't do semantics; and I suppose he would be keen to extend the advice to pragmatics as well. I disagree. I am more sympathetic to Jackendoff when he says that he is "interested in constructing a stance on meaning from which it is possible to make sense of the sort of detailed empirical investigation that linguists do. The relation between philosophy and the dirty work has to be a two-way street." (Jackendoff 2002: 268). In this volume, linguists and philosophers show the benefits of travelling back and forth on such a street. Even if the varieties of topics, approaches and methodologies may end up being a bit overwhelming, everyone with an interest in cross-boundaries research in semantics and (near-side) pragmatics will find much to chew on in this volume."
Reviewed by Kepa Korta in Notre dame Philosophical Review (28.10.2017) 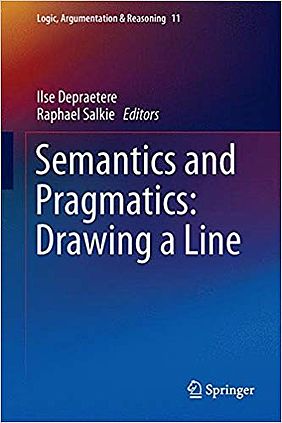