Discourse, Identity and Citizenship in the European Union

Despite the undeniably impressive achievements of the EU, forms of resistance to the European integration process remain strong in numerous quarters. Drawing upon a theoretical framework centred on the dimension of discourse as social practice, this book takes the literature on EU discourse a step further by integrating insights from discourse studies with key models derived from the domain of political science. The aim is to explore how recent socio-political transformations have affected the way in which the EU discursively represents itself as a legitimate political entity. The idea behind this cross-disciplinary approach is that discourse theory can contribute to a critical renewal of EU studies by drawing attention to the rhetorical aspects that are constitutive of social structures and identities. The analytical parts of this corpus-assisted study explore the evolution of discursive practices in various EU genres at two disruptive moments in the recent history of European integration: the rejection of the draft EU Constitutional Treaty in France and the Netherlands and the UK referendum on EU membership.

Giuditta Caliendo is Associate Professor of English Language and Translation Studies at the University of Lille, Co-Editor-in-Chief of the I-LanD (Identity, Language and Diversity) Journal and Board member of the PhD programme in Mind, Gender and Language (curriculum Languages, Linguistics and ESP) at the University of Naples Federico II. She is a former Fulbright scholar (University of Washington) and EURIAS fellow (Marie Curie Action). Her research interests lie in legal translation, institutional discourse, language policies, genre analysis and (critical) discourse analysis. 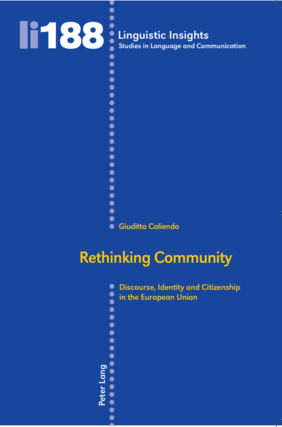