Mathematics, Logic, and their Philosophies

Essays in Honour of Mohammad Ardeshir

Series: Logic, Epistemology, and the Unity of Science, Vol. 49

This volume is a collection of essays in honour of Professor Mohammad Ardeshir. It examines topics which, in one way or another, are connected to the various aspects of his multidisciplinary research interests. Based on this criterion, the book is divided into three general categories. The first category includes papers on non-classical logics, including intuitionistic logic, constructive logic, basic logic, and substructural logic. The second category is made up of papers discussing issues in the contemporary philosophy of mathematics and logic. The third category contains papers on Avicenna’s logic and philosophy.

Mohammad Ardeshir is a full professor of mathematical logic at the Department of Mathematical Sciences, Sharif University of Technology, Tehran, Iran, where he has taught generations of students for around a quarter century. Mohammad Ardeshir is known in the first place for his prominent works in basic logic and constructive mathematics. His areas of interest are however much broader and include topics in intuitionistic philosophy of mathematics and Arabic philosophy of logic and mathematics. In addition to numerous research articles in leading international journals, Ardeshir is the author of a highly praised Persian textbook in mathematical logic. Partly through his writings and translations, the school of mathematical intuitionism was introduced to the Iranian academic community. 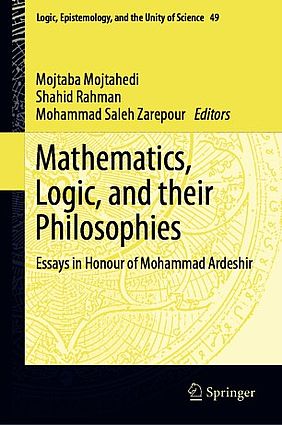