Dialectic after Plato and Aristotle

Ancient dialectic started as an art of refutation and evolved into a science akin to our logic, grammar and linguistics. Scholars of ancient philosophy have traditionally focused on Plato's and Aristotle's dialectic without paying much attention to the diverse conceptions and uses of dialectic presented by philosophers after the classical period. To bridge this gap, this volume aims at a comprehensive understanding of the competing Hellenistic and Imperial definitions of dialectic and their connections with those of the classical period. It starts from the Megaric school of the fourth century BCE and the early Peripatetics, via Epicurus, the Stoics, the Academic sceptics and Cicero, to Sextus Empiricus and Galen in the second century CE. The philosophical foundations and various uses of dialectic are closely analysed and systematically examined together with the numerous objections that were raised against them. 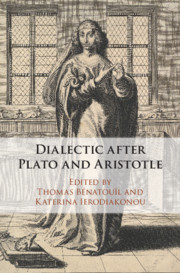